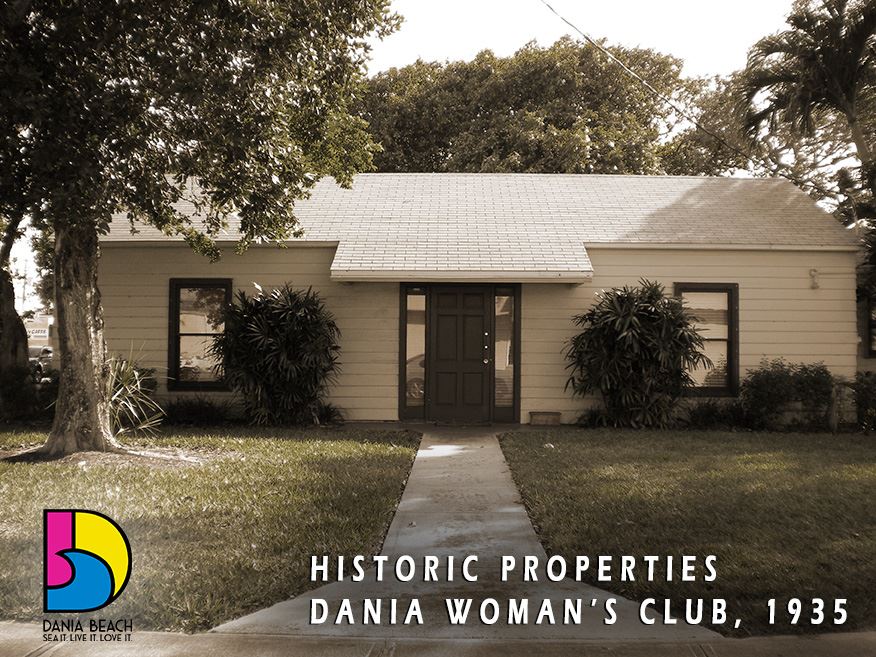 The Dania Community Library and Woman’s Club is significant in the areas of architecture, community planning and
development, and social history at the local level for listing in the National Register of Historic Places.

The building possesses significance as the municipal library and woman’s club in the City of Dania Beach. Through the impetus of the Dania Woman’s Club, the building developed in two phases: the construction of the library in 1935 and the addition of the adjoining meeting hall in 1950.

The structure is a wood frame building, which represents a specialized building type designed and constructed to serve education and social functions. The building possesses additional special merit, for it broadens our understanding of the development of Florida’s woman’s clubs. The building retains its architectural integrity to a high degree.


The Dania Woman’s Club was organized July 18, 1923. Club projects in the 1920’s included sponsorship of a girl scout troop, beautifying the cemetery and Federal Highway, and supervising activities in the town’s community club. It undertook a library project in 1928, starting with fundraising. By 1934 its library had expanded to 1,000 books. A building committee was organized in 1935, with Mrs. A.J. Ryan as Chair. Plans for a building were prepared by John M. Peterman, . Lauderdale architect, and presented at the 1935 meeting.

Later that month, the City gave the club permission to build the library in the northeast corner of the city park. In a report to the City Council in 1935, the club president indicated the cost of construction would be $900. The council endorsed the project and contributed $150. The project was turned over to  Dania Builder John Anderson. The completed building, used as the community library, contained 3,047 books.

In late 1940, the club began looking toward extending the building to include a clubhouse area. The war interrupted activities and it was not until 1949 that construction began. The cost of construction for the extension came to about
$5,000.  In the thirties ten years before, club membership rose to nearly 100 in

1954. In the mid-1970’s, the Broward County Library System began developing a countywide service and in 1978 the Dania Woman’s Club branch was closed. The building was subsequently used for storage and a meeting space.

ARCHITECTURAL SIGNIFICANCE
The building is an example of wood frame vernacular construction. Frame vernacular, the relevant style of residential architecture in Florida, refers to common wood frame construction techniques employed by lay or self-taught builders. Before the Civil War, residents relied upon and their own methods and design to construct houses. The Industrial Revolution permitted standardization of building materials and and exerted a pervasive influence over vernacular house design. Popular magazines helped to make architectural trends universal throughout the country. The railroad provided cheap and efficient transportation for manufactured building materials. Ultimately, individual builders had access to finished architectural product from which to create their own designs. Many popular vernacular building forms of the Antebellum period were used by builders during the late 19th and early 20th centuries.