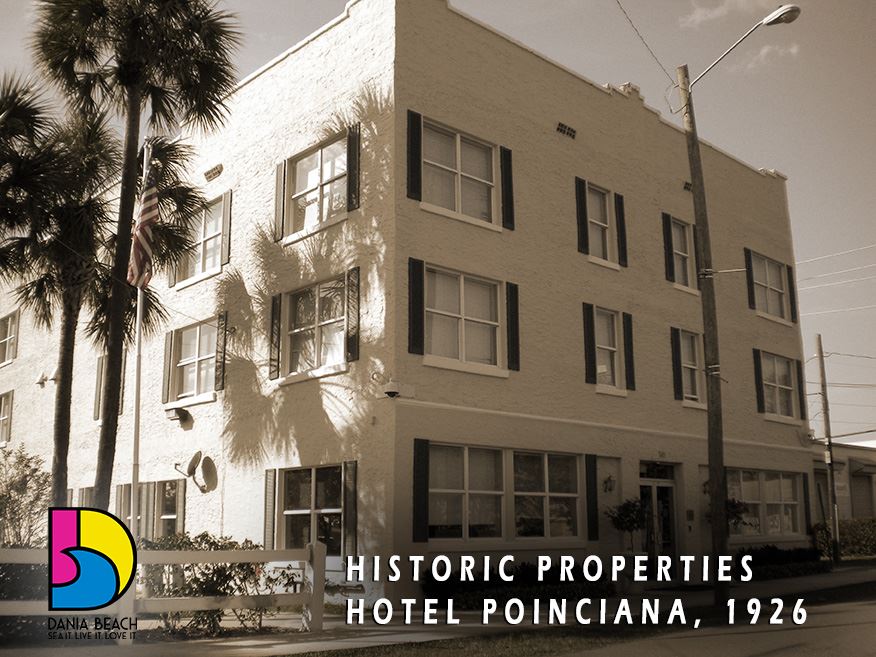 The City of Dania Beach Designated this structure as a historic property in 2000 by Ordinance Number 2000-038.

The Hotel Poinciana, located at 141 NW 1st Avenue, possesses significance for its Mission inspired architectural style. The property retains much of its integrity and has been well maintained and is a good example of adaptive use.


One of the city’s historic downtown hotels, the Hotel Poinciana was constructed after the 1926 hurricane and provided lodging for both transients and tourists passing through Dania Beach. Originally run by Katie Buchanan, the structure remained a hotel until the mid-1980’s when it was converted to rehabilitation housing.


Inspired by the Mission style of architecture, the three-story concrete block structure has a smooth and textured stucco exterior. Centered on the front façade is a curvilinear gable with molded coping that runs along the stepped parapet on the north and south elevations. Symmetrically paired canals lie along the upper front façade. Fenestration consists of 1/1 double hung sash windows with lug sills and varies from single and paired to banded windows on each elevation. Windows run symmetrically along the east and west elevations but are asymmetrical on the north and south elevations. There is little ornamentation throughout the building and sparse landscaping surrounding the property.